First evidence of new weapons being used in Syria

Recently, first evidence of new weapons being used in Syria: 152mm Msta-B howitzers (earlier we have only seen photos and videos of these howitzers being transported, not used) and incendiary air bombs.

One of the first evidence of Msta-B howitzers being used in Syria emerged in late October, when a convoy of Russian vehicles with this howitzer was photographed in Shilfatiyeh (Latakia governorate): 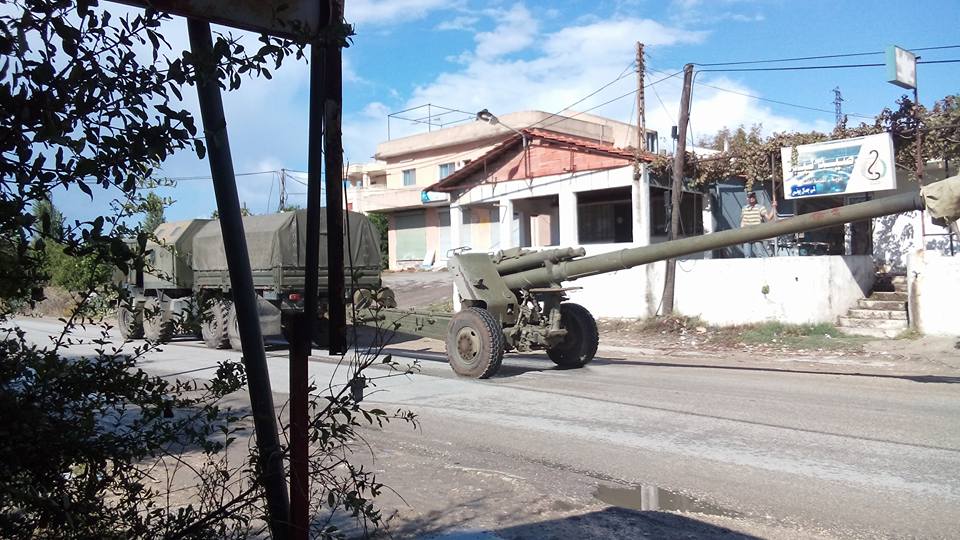 On November 7, a Syrin pro-government news agency SANA published a video of fighting in Eastern Homs. In the video you can see a Russian military helicopter Mi-24 hound (numbered "40 yellow"): 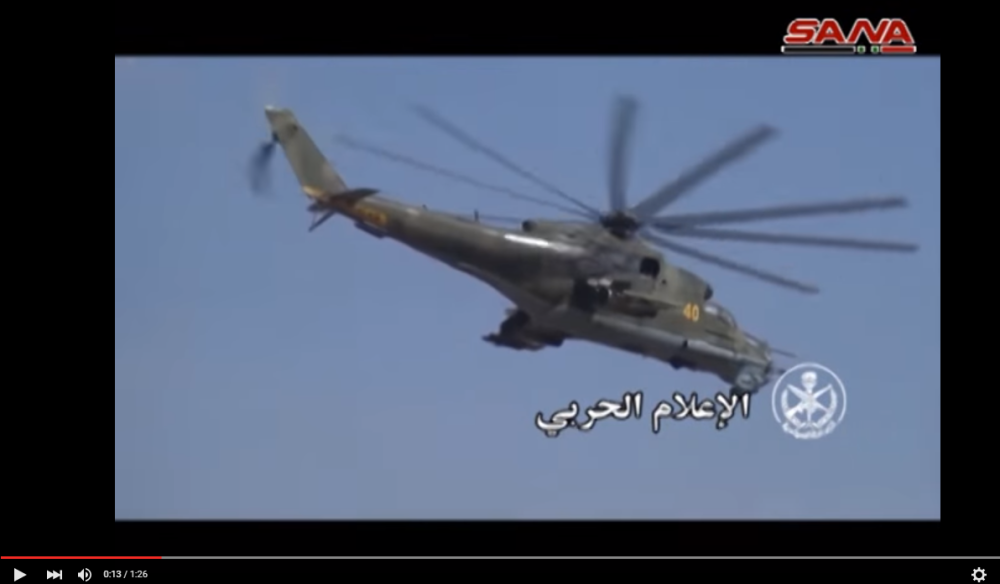 Then we can see shots of 2A65 Msta-B howitzers in use. Near the howitzer, we can see a man in a desert uniform, worn in Syria only by Russian servicemen: Example of Russian soldiers in desert-colored uniforms at Hmeimim airbase: 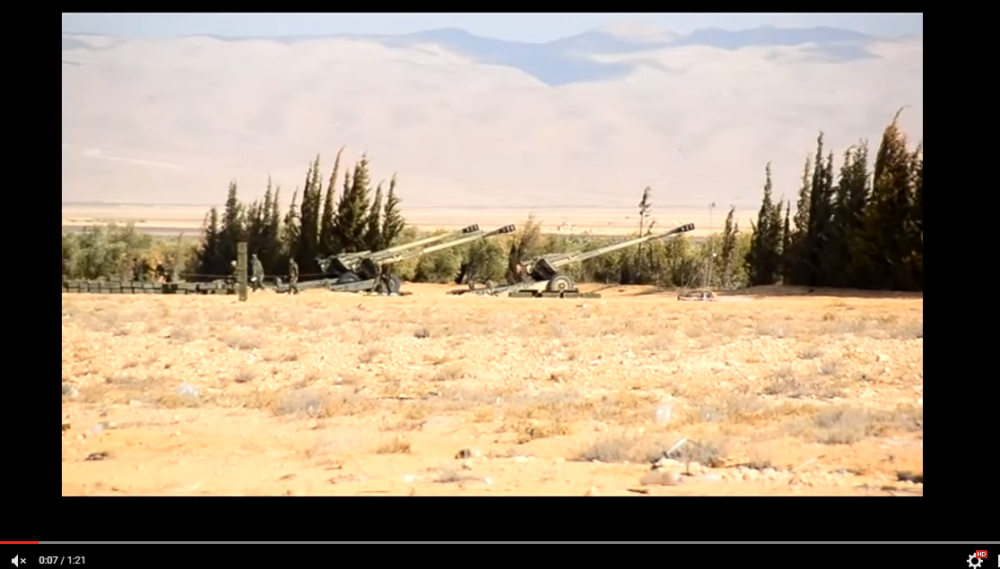 Near the howitzers you can see ammunition boxes as well as uniformed servicemen. We can't determine which soldiers are seen in the second video: They could be Syrian government soldiers or Russian soldiers. More interestingly, at 0:54 we can hear an order in Russian: "Работай!" ["Work!"], which likely means "Work on the target", "Fire on the target".

It is hard to determine where exactly in Eastern Homs ("Eastern Homs" being present in the title of the video) the first video was filmed and who is the enemy. However, the Palmyra video certainly depicts fighting against ISIS. Both videos could have been filmed close to each other, since Palmyra is situated in Eastern Homs: 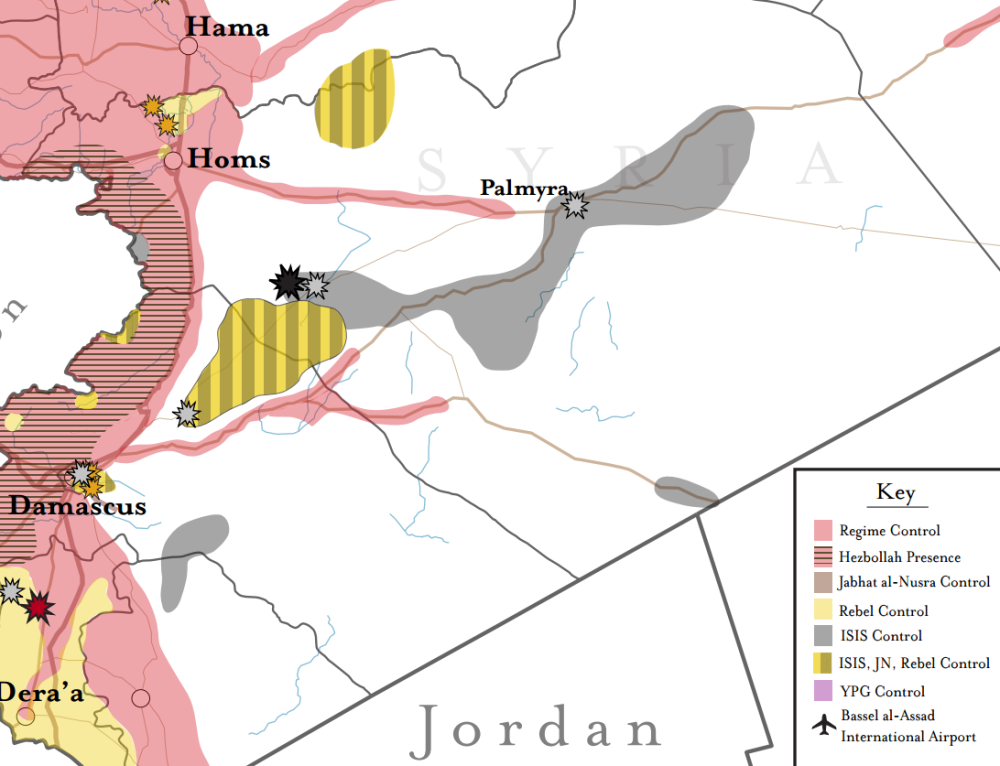 On November 12, locals from Idlib governorate reported "Russians using phosphorous bombs". Judging by our experience of the conflict in Eastern Ukraine, accusations of "phosphorous bombs" use is a common propaganda tool, which often involves baseless allegations. Our team decided to analyse the reports from Idlib.

Videos of incendiary bombs being used were published by STEP news:

as well as Smart news:

According to local activists, these bombs were used in Benin and Harsha villages in Idlib governorate.

complete name it's like "Harsha Basnaqoul" next to Zawyah mount wait To me get the precise location https://t.co/3XwevPTj0U

On November 13, Facebook group ALMarra Today (a group dedicated to Maaret al-Numan town, in the vicinity of which Benin and Harsha villages lie) published photos of the aftermath of the airstrike (first and second album). Comparing a frame from the video with the photos suggest they were also taken in Benin village:

The descriptions say that the airstrikes destroyed a bakery and an olive oil factory. One of the photos indeed shows an extracted oil reservoir Pieralisi Jumbo 2: The same reservoir can be seen on an agricultural machine seller's website: 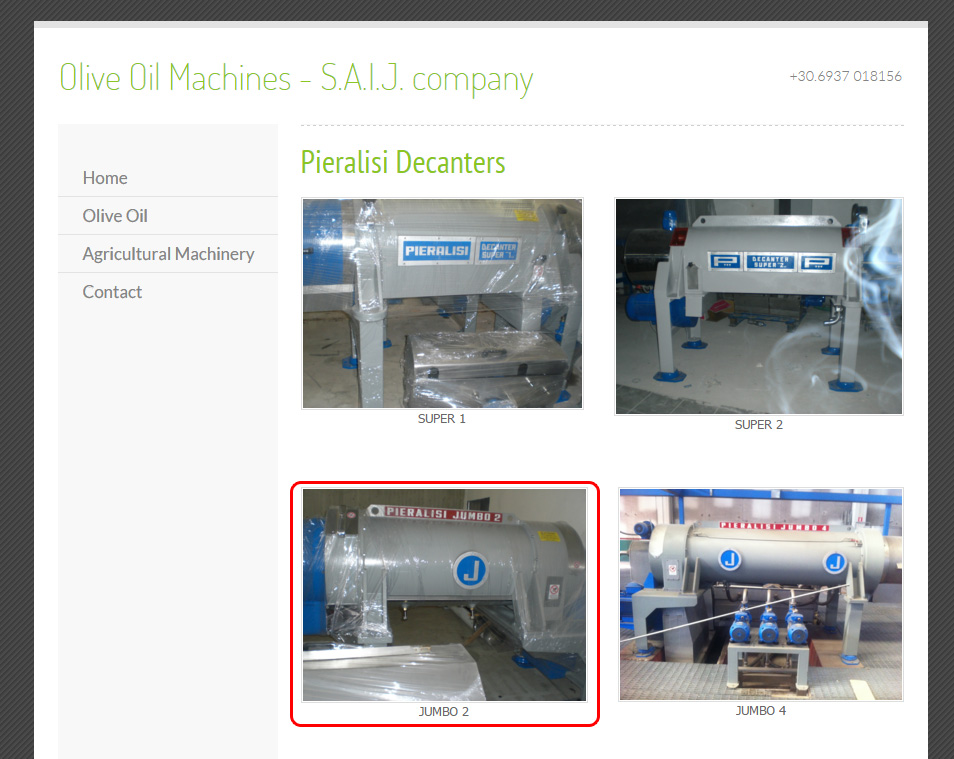 There's rebel held area including #FSA not #JN there https://t.co/dO9XeyFNJD

It is hard to determine an aircraft's allegiance even in daylight, given that the Syrian Arab Air Force has similar Mi-25 helicopters. However, a day before the incendiary bomb attacks, RuAF's Su-30s supported SyAAF airstrikes in the same area:

The incendiary airstrike took place on the night of November 12. In the evening of November 13, Russia's MoD reported destroying an an-Nusra ammo and IED factory near Maarat al-Nuuman:

It should be noted that Benin village is indeed near Maarant al-Nuuman, 10 kilometers from the city. The incendiary airstrike did indeed destroy a factory, but one that produced olive oil, not ammunition. We believe baking ovens and olive presses can't be used for producing ammunition. This was the equipment we saw in the aftermath photos. Besides, olives themselves can be seen in the photos: 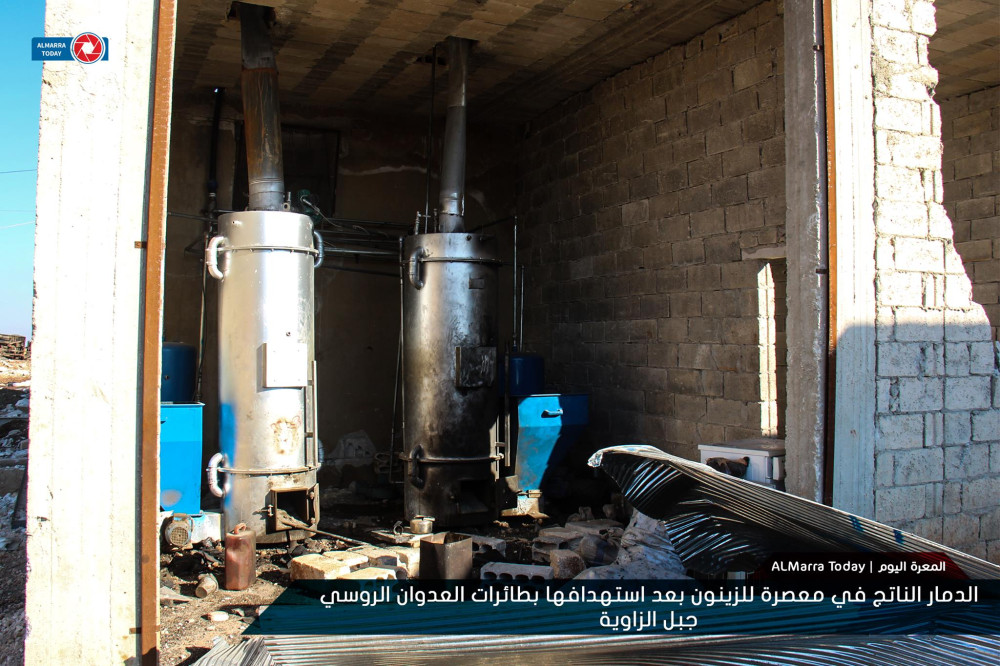 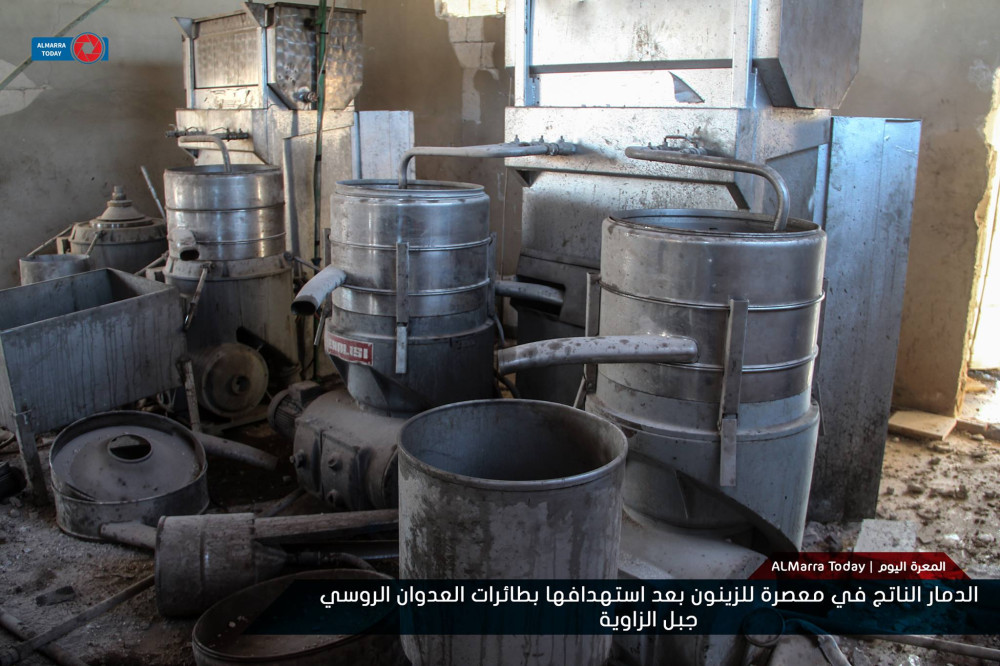 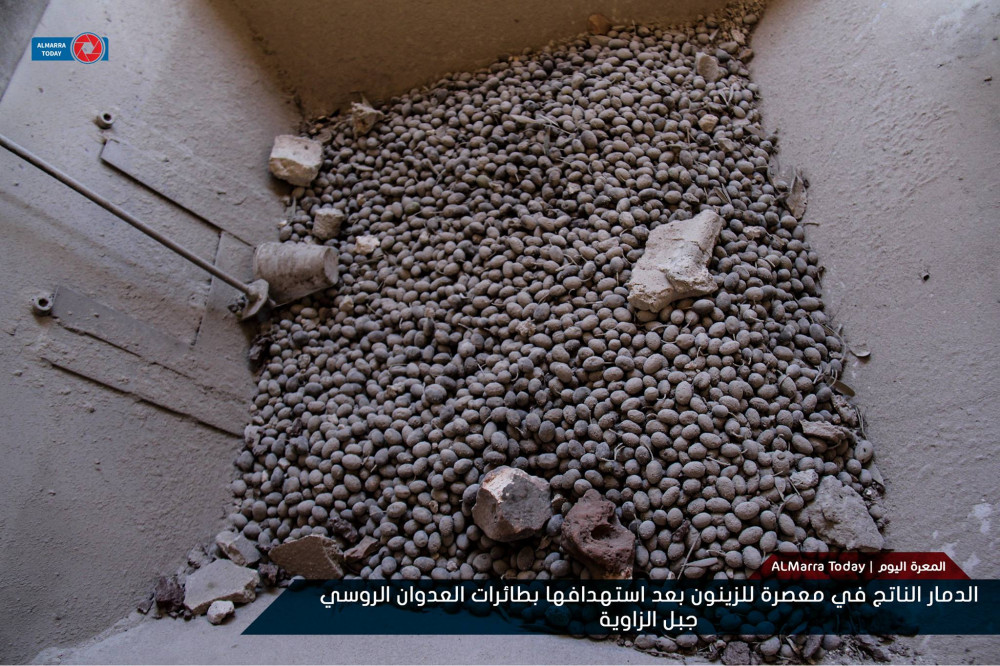 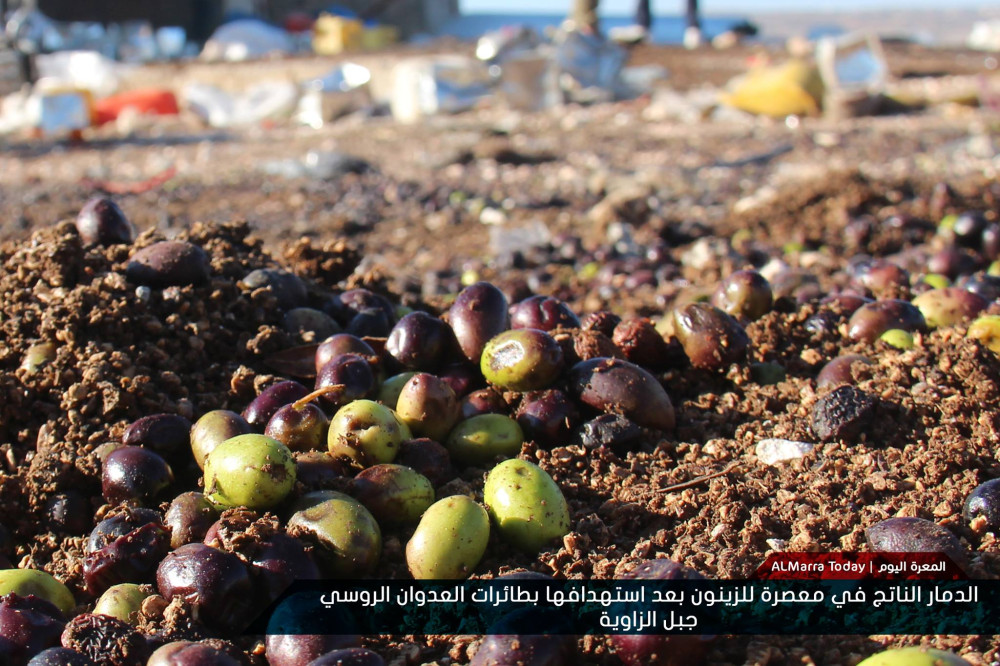 A local gave us the exact coordinates and took a picture at the site of the airstrike: 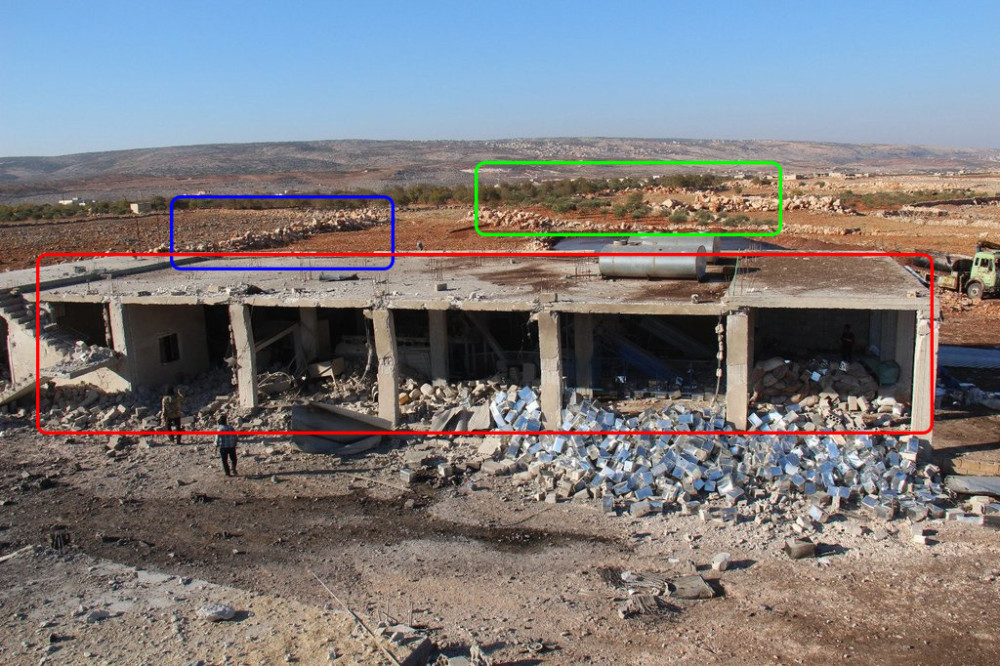 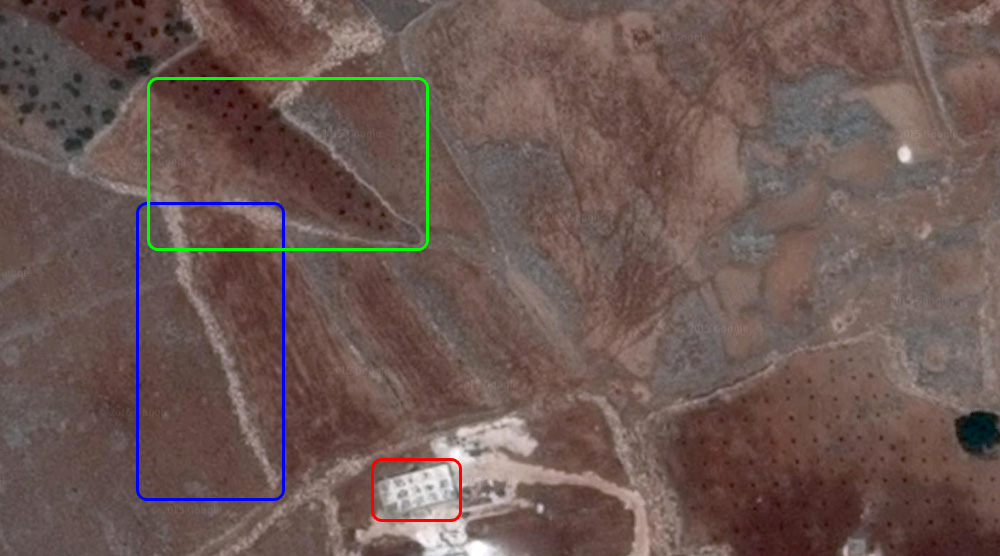 First, it should be determined that the bombs appearing in the videos aren't flare (illumination) bombs like SAB 250-200. Recently, photos emerged of RuAF in Syria having SAB 250-200 flare bombs: 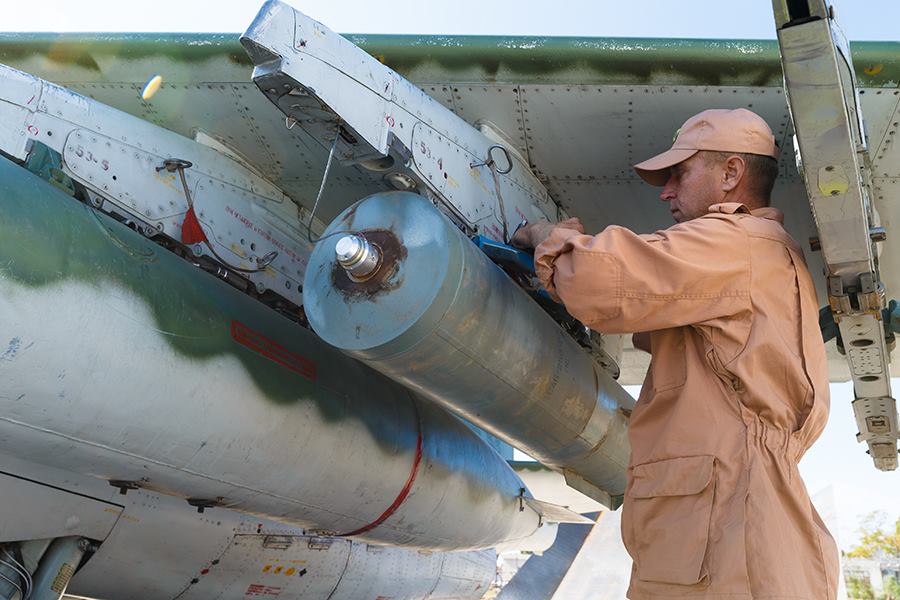 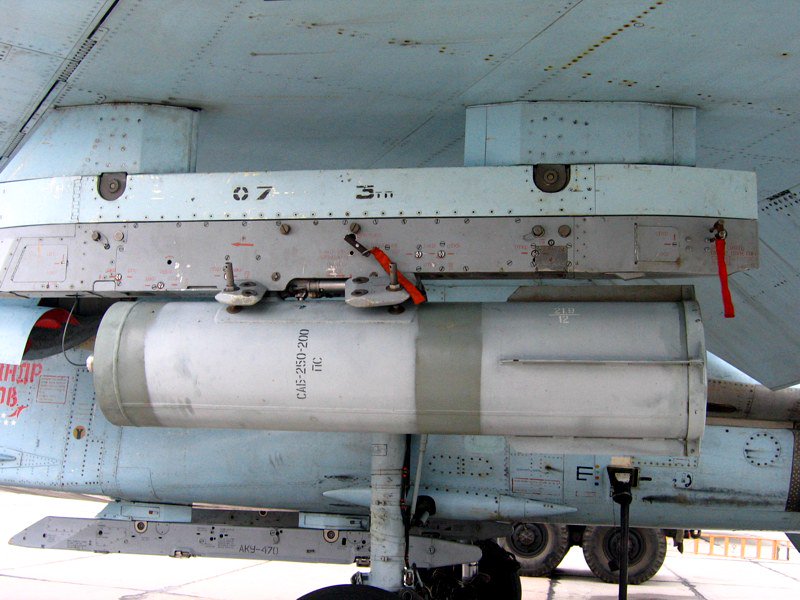 RuAF has already used flare bombs in Syria. Here's how their use looks like: 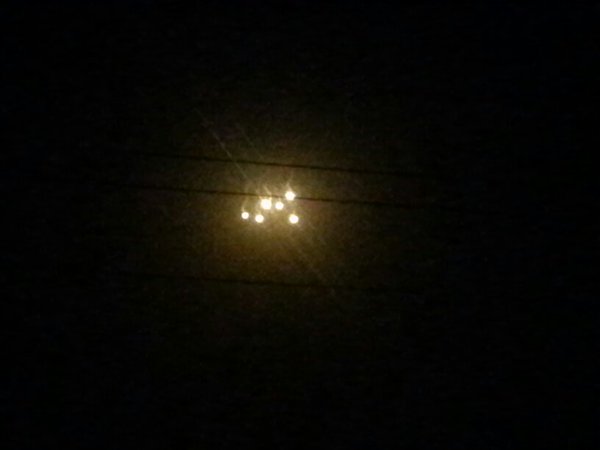 A SAB-250-200 bomb contains 7 flares that are ejected and burn for 6 minutes, parachuting slowly to the ground. In the videos above, we see a lot more flares, the descent taking much less than 6 minutes. Some of the videos above also show large fires immediately forming from these flares on the ground, which shouldn't happen when flare bombs are used. Thus, we have determined, that the videos above indeed show the use of incendiary bombs.

What is the model of these incendiary bombs? The group ALMarra Today we've mentioned above published photos of ammunition casings remaining: 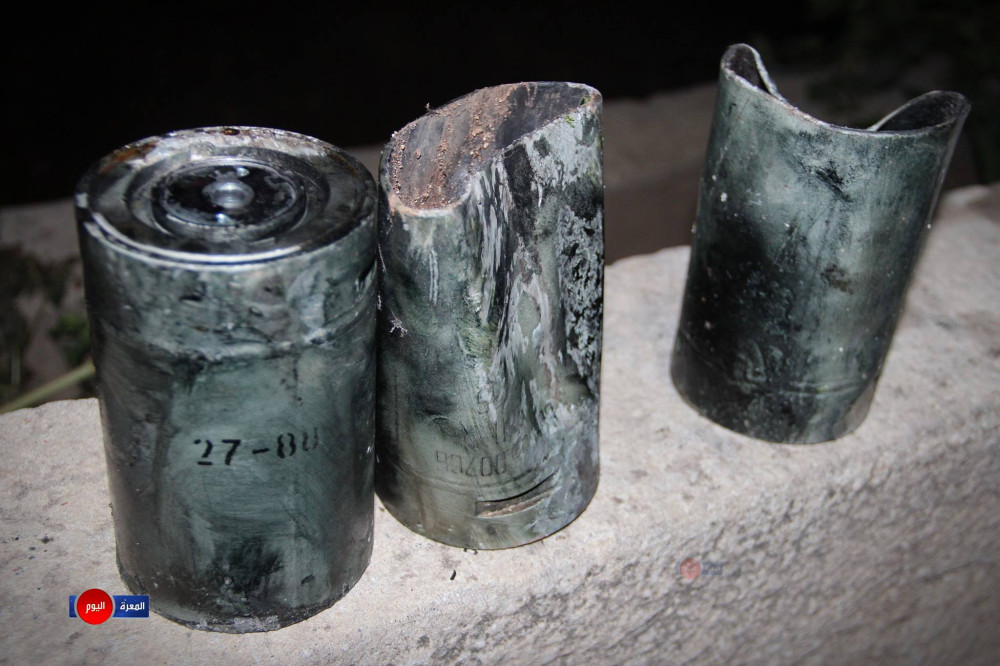 After comparing the image with reference photos of various bombs, we've determined that it is the casing of an incendiary bomblet ZAB-2,5S, deployed in RBK-500 cluster bombs: 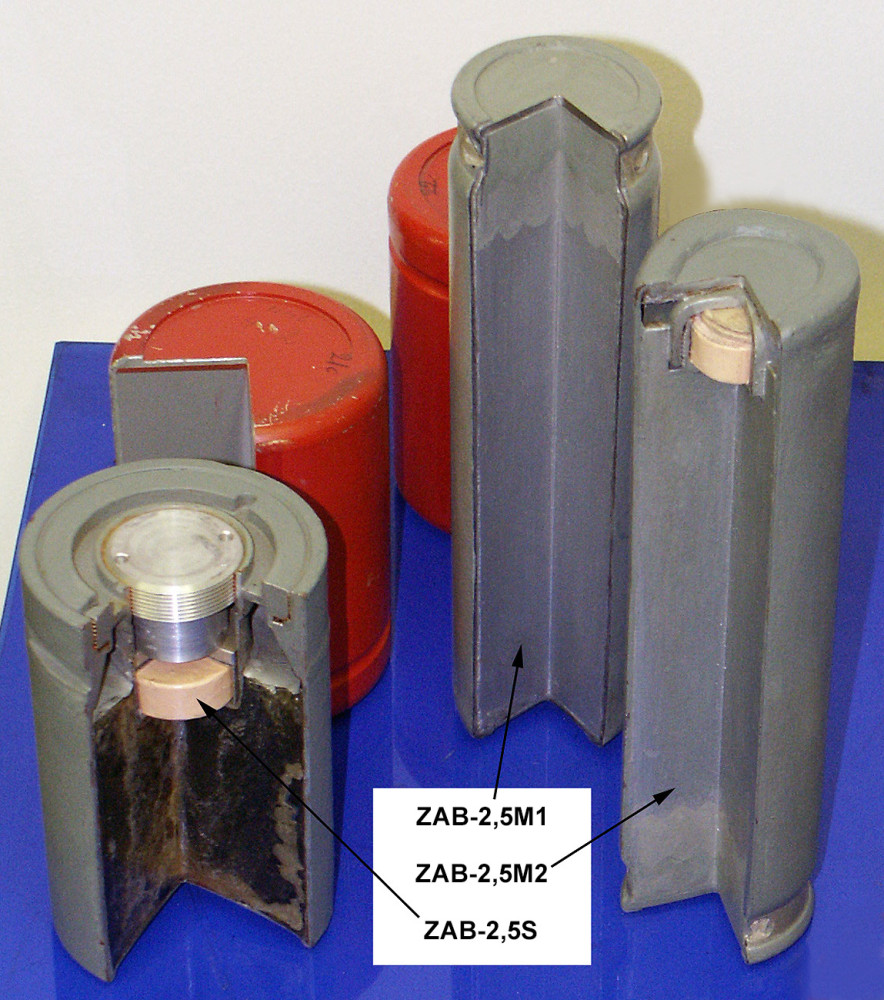 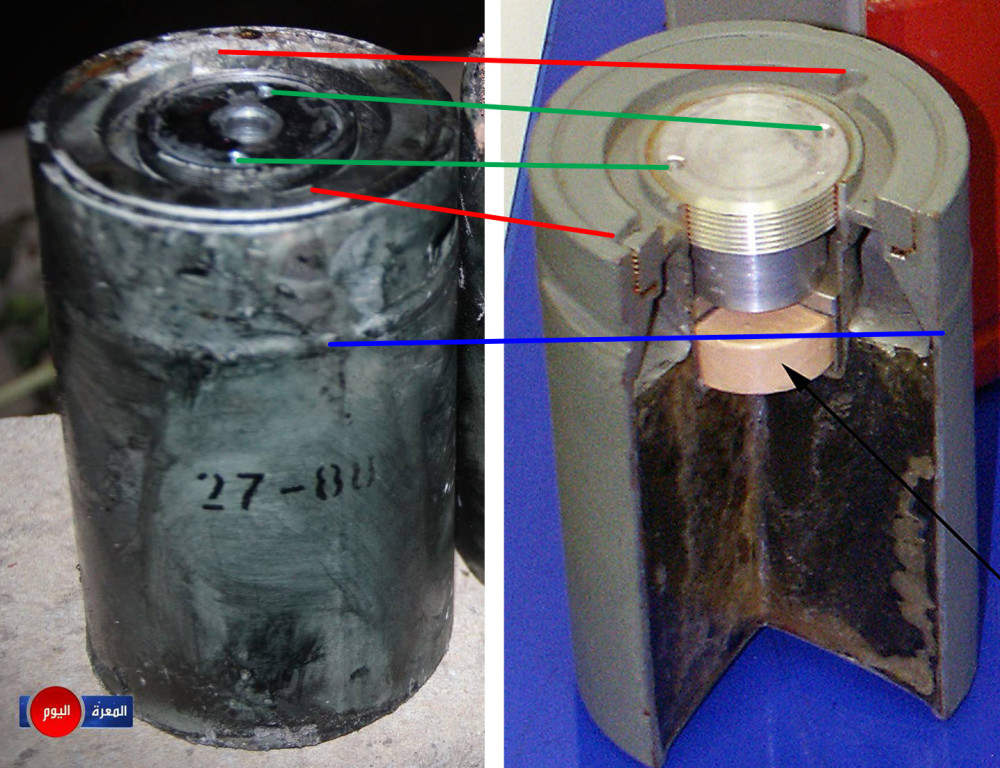 The ZAB-2,5S bomblet contains a thermobaric compound OM-68-35. We do not know its composition. A similar type of bomblet, ZAB-2,5M2, which can also be used in an RBK-500 cluster bomb, contains N-17 incendiary compound. Interestingly, in August 2014, Russia's Investigation Committee accused Ukraine's Armed Forces of using N-17 incendiary compound, calling it a banned weapon: 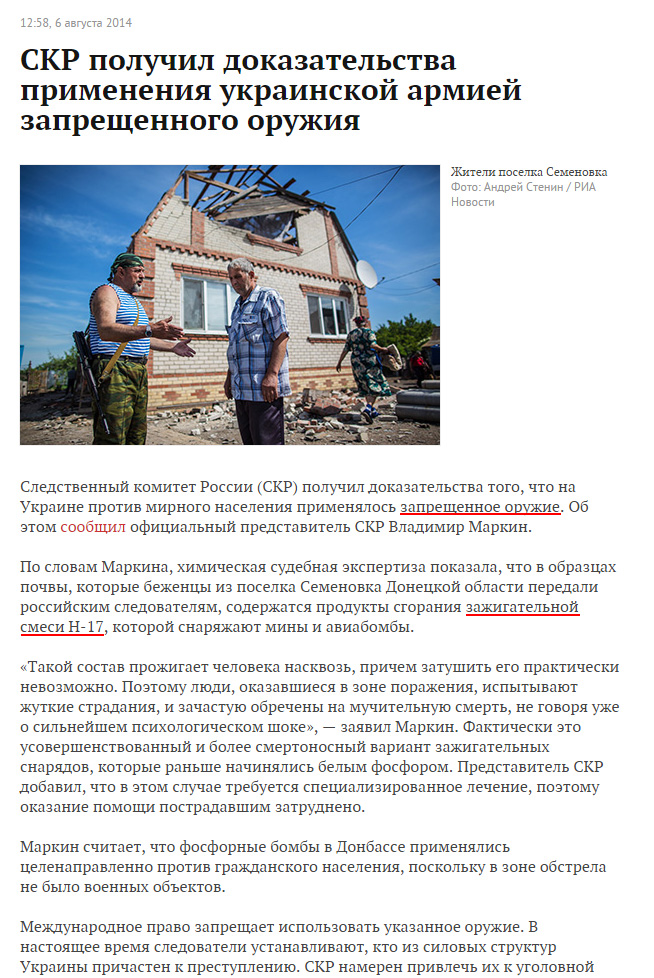 Since ZAB-2,5S and ZAB-2,5M2 are from the same class of bombs, we believe ZAB-2,5S has a similar effect on the enemy of the one mentioned by the Investigtion Committee. Item 1, article 2, protocol III to the Geneva convention "Protocol on Prohibitions or Restrictions on the Use of Incendiary Weapons" forbids using incendiary weapons against civilian targets. An olive oil factory certainly is such target. However, item 1 of article 1 of the same protocol states that incendiary weapons do not include:munitions designed to combine penetration, blast or fragmentation effects with an additional incendiary effect. Since we don't know the composition of OM-68-34 compound, we cannot conclusively determine if ZAB-2,5S bomblet is an incendiary weapon for the purposes of the convention.

RBK-500 is a cluster bomb. Due to imperfect fuses, bomblets of earlier cluster bombs often failed to explode, effectively turning into landmines. Despite fuses and self-destruct mechanisms development mostly eliminating the "mining effect" of unexploded submunitions, many human rights watchdogs still believe cluster bombs to be "inhumane" weapons and urge to ban them. In 2008, a cluster munitions treaty, banning, their use, was signed in Dubai. As of today, it has been signed by 108 states. However, such countries as Russia, the USA and China haven't signed it.

On November 11, photos appeared of T-90 tanks at Hmeimim airbase, which was reported by Stratfor in late September: 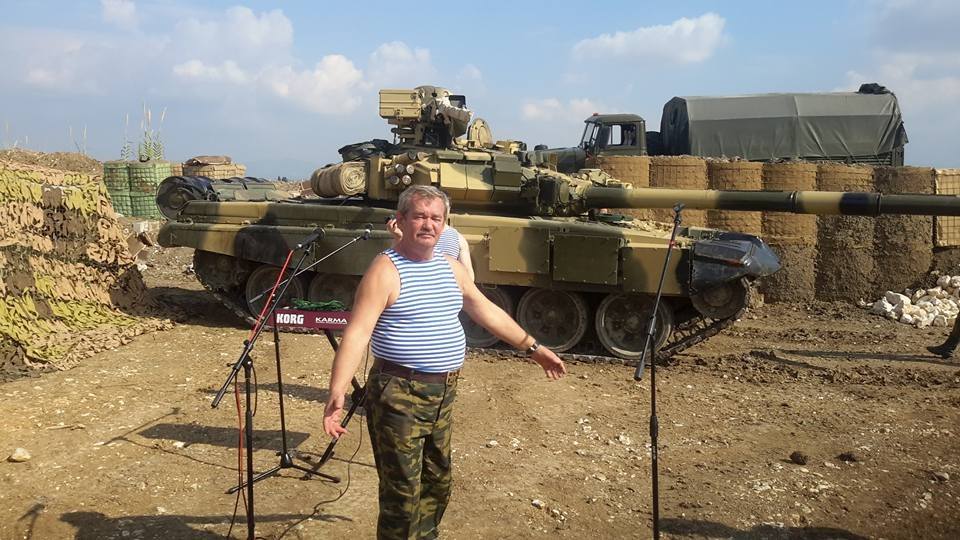 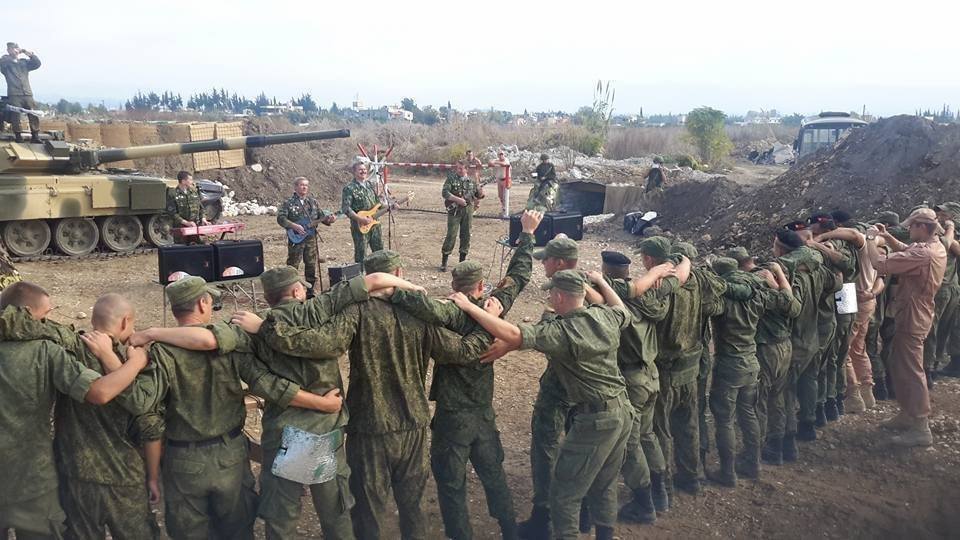 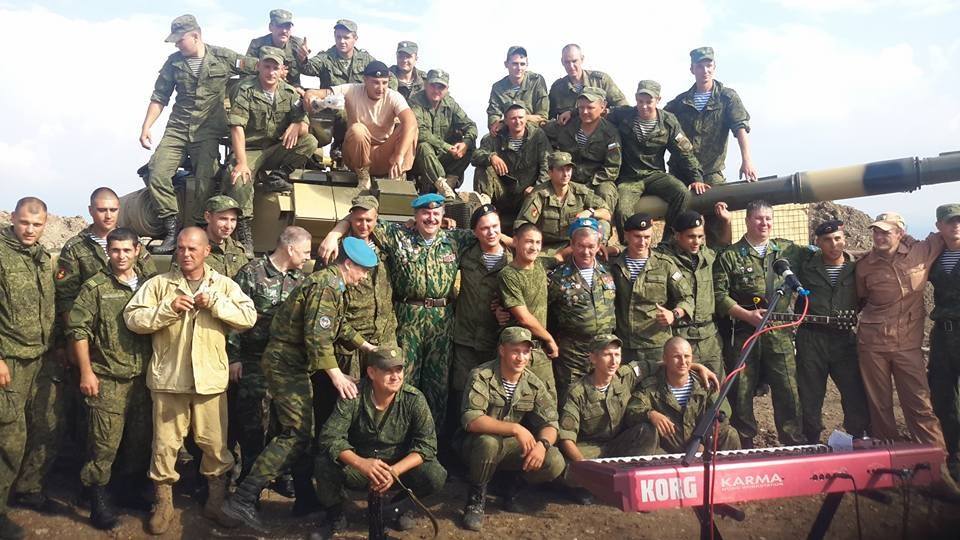 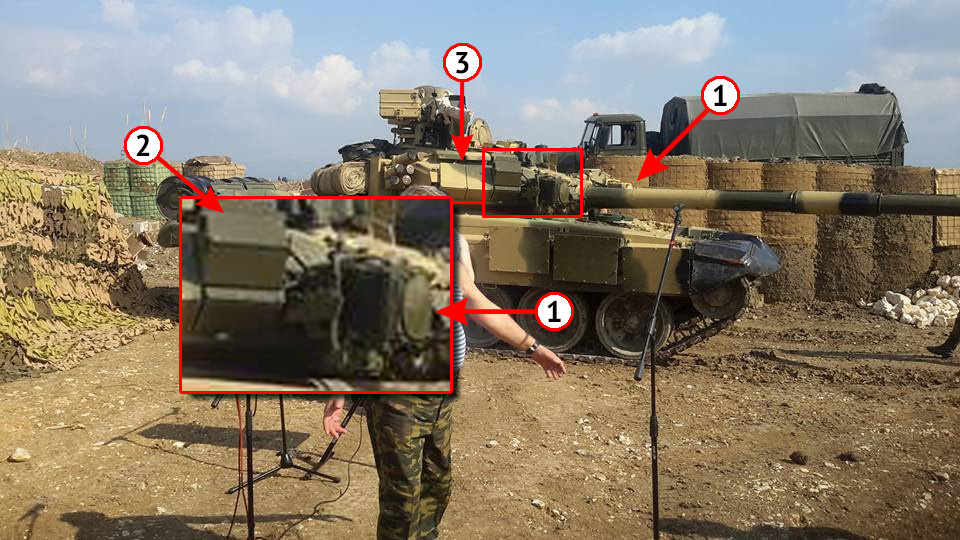 Reference photos of a T-90 turret with Shtora systems (source): 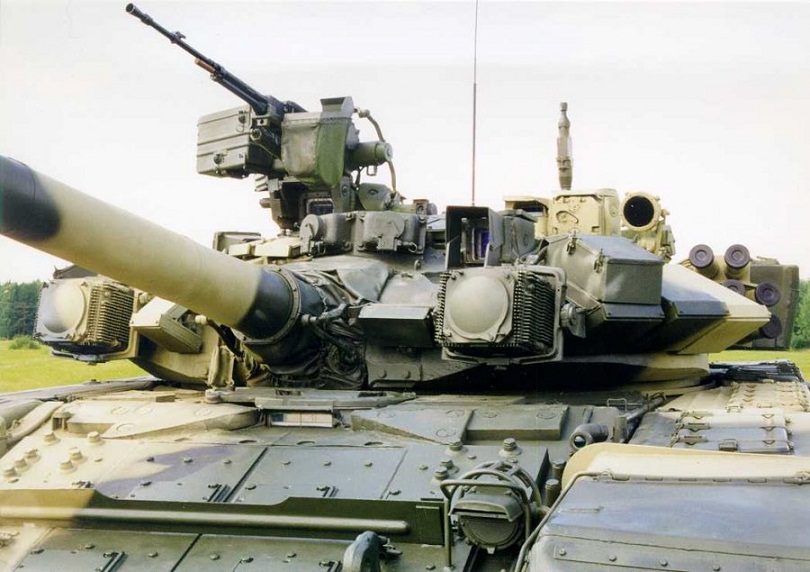 In the media, you can find photos of T-90s with a similar camo pattern (without Shtora systems): 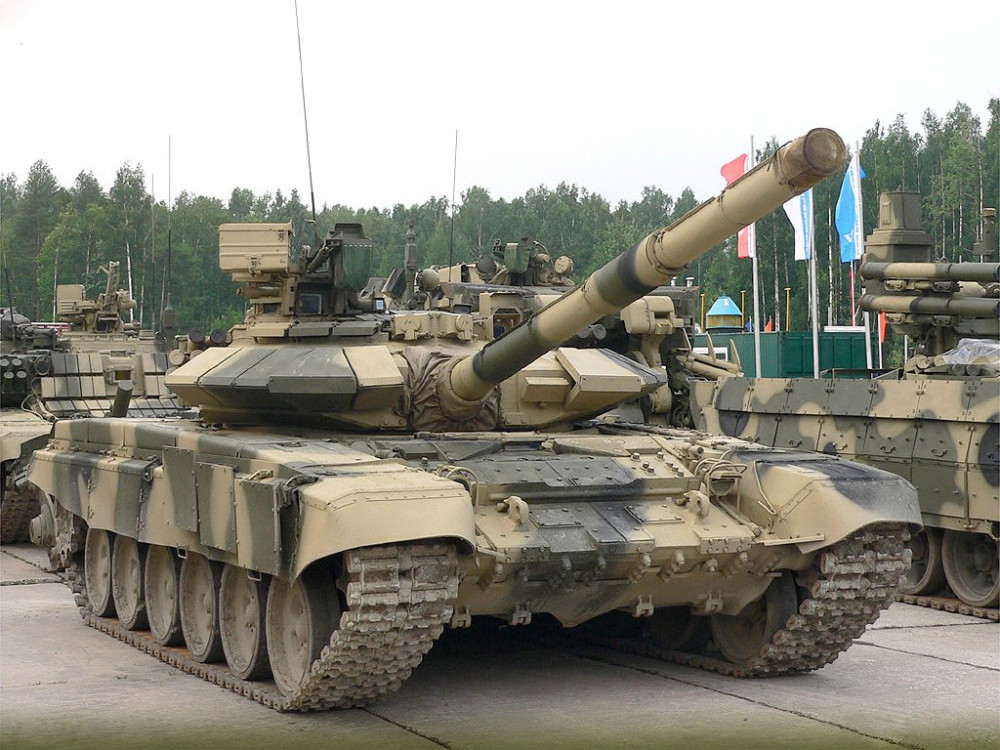 Thanks to Twitter user @ain92ru for help in preparing this chapter.

Thus, we believe we have proven the following facts:

— russian troops are directly involved in fighting on the ground in Syria, using artillery, in particular 152mm 2A65 "Msta-B" howitzers. Earlier we and other teams reported finding Russian convoys moving away from the frontline with such howitzers;

— russian Air Force has been using non-discriminatory excessive damage weapons (cluster bombs with incendiary submunitions) in areas without IS or an-Nusra presence. These weapons were used against a civilian facility (olive oil factory). Moreover, the international community has concerns with using this type of weapons, many countries (not including, however, Russia) have signed conventions banning this type of weapons. These munitions can't be viewed as precision;

— there are modern Russian ground vehicles at Hmeimim airbase, including T-90 tanks.